UD has 12 MOONDUST shadows that are available exclusively on their website. 8 of the 12 are brand new and 4 were new this summer. But I haven’t seen any of them advertised. I didn’t even know that they existed until I came across them on their website the other day. I couldn’t find decent swatches for the life of me so I bought these 3 based solely on the photos of the pans and the vague descriptions provided on the website. Actually vague isn’t fair. The descriptions are detailed but often not accurate, IMO.
DARK FORCE is described as a taupe brown with gold sparkle. I’d describe it as an olivey brown with gold and purple glitter. The closest thing I can think of to a dupe is CP AMIRA, which has long since been discontinued. I was thinking maybe SO QUICHE but that’s much lighter and the glitter is different.
HORIZON is described as rose gold with gold and pink sparkles. I’d call it a deep red bronze with plum undertones. I’ve got 2 potential dupes for this one but I haven’t had time to swatch them yet to confirm. I might do that now.
SHOCKWAVE is described as deep berry with pink and blue sparkle. I don’t even know how to describe it. Magenta with a purple and blue shift? It’s similar to INGLOT 120 PIGMENT but I don’t think they’re dupes. I might do a side by side of those too while I’m at. I know they’re slightly different but I can’t describe how without seeing them together.

I’m having mixed feelings about these guys. I’ll have to actually wear them on my eyes before forming a definitive opinion. But now I kinda want the rest of them just to see what they look like. 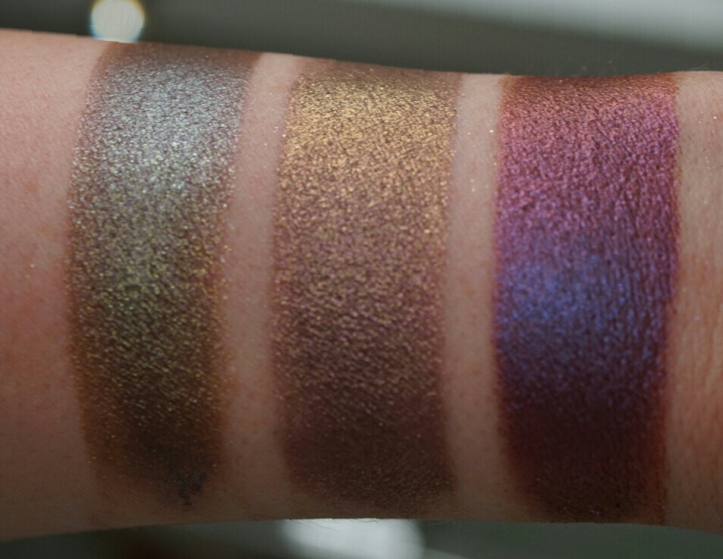