The Makeup Geek holiday collection has arrived! It includes a nine pan eyeshadow palette, lipgloss trio, five pairs of lashes and four blending sponges. I don’t have any of the sponges but they’re $13 each or $11.70 if you use our affiliate code BEAUTYCULT to save 10%. Let’s quickly go over the other items before we move on to the main attraction, the palette!

This is a trio of mini lip glosses. They’re only sold as a set and they’re $18 with a discount code. No swatches because… I hate swatching lip glosses. They have a decent amount of pigment. Enough so that I’d only be brave enough to apply Creamsicle Delight without a mirror. The formula is hydrating and non-sticky with a light vanilla scent.

The lashes are $8 a pair ($7.20 with a discount code) and synthetic. So far I’ve only worn ‘Elegant’ once but according to the website, you should be able to get about 10 wears out of each pair, if you take care of them.

The Charmer lashes are natural and a little wispy with a clear band. 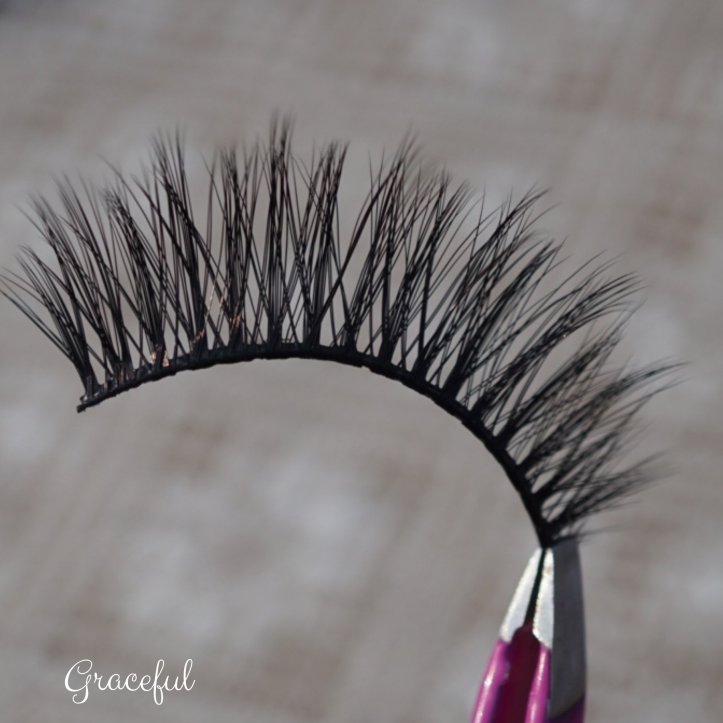 The Mischievous lashes are 3/4 length with a clear band. This pair is perfect if you’re just getting into wearing false lashes. The shorter length is a lot easier to glue down than a full length lash

The Fearless lashes are a little more full than the first three pairs. They’re slightly longer in the center with a black band 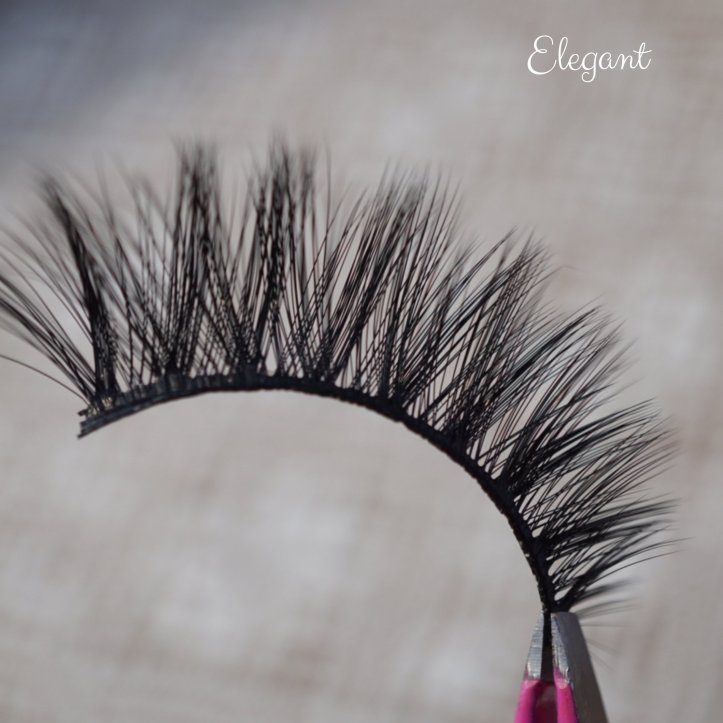 The Elegant lashes are the most full and dramatic. They’re similar to House of Lashes ‘Iconic’ 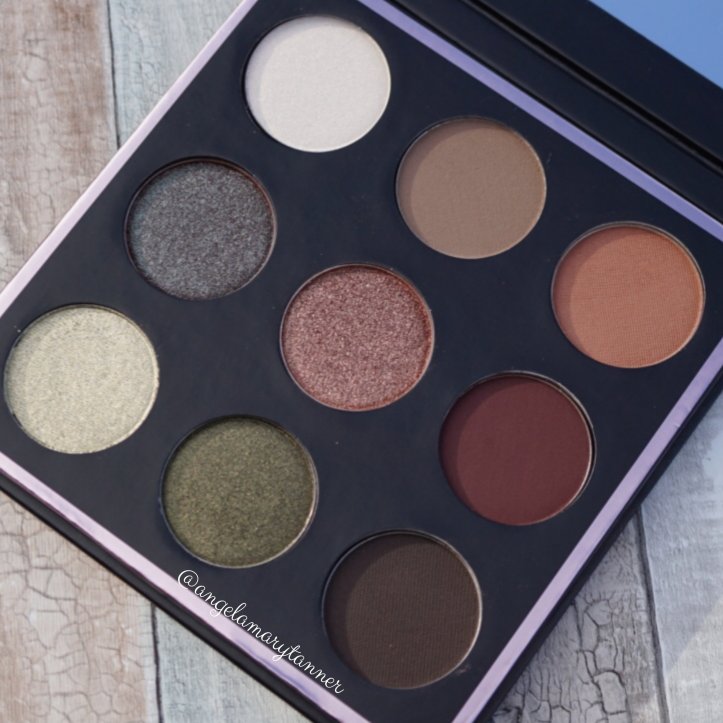 The palette retails for $35 ($31.50 w/ code BEAUTYCULT) and it’s the same packaging as their last few releases but they included a decorative sleeve to help it stand out a bit. It includes four mattes, three foiled shadows and two foiled duochromes. I love MUG’s foiled formula. Did MUG invent ‘foiled’ shadows? I think they did. Or more accurately I think that they coined the term ‘foiled’ shadow. Anyway. As I was saying, I love Makeup Geek eyeshadows. I use them more than anything else in my collection and I’d recommend them to anyone regardless of their level of experience. I think that palette is beautiful but I do have one issue that I’ll elaborate on more at the end. 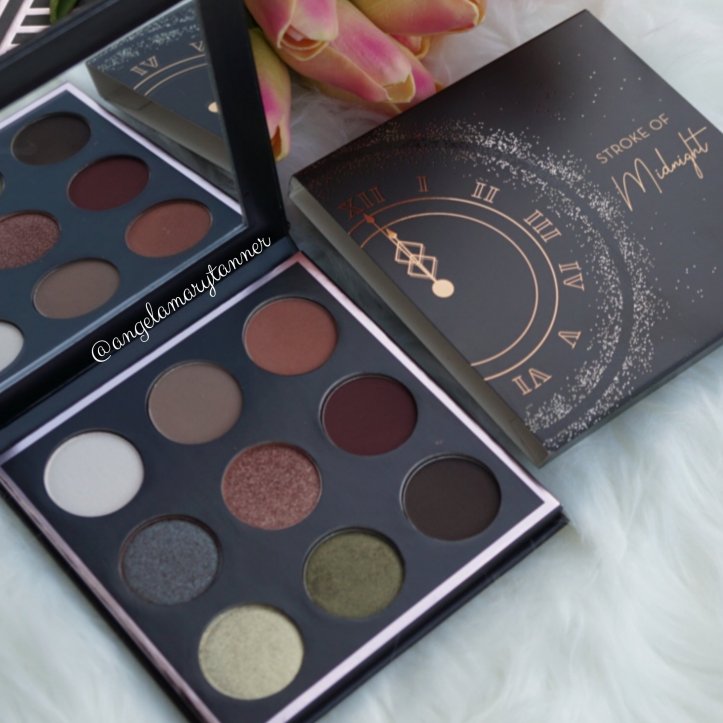 Soiree is white with peachy red reflects. It reminds me of a pressed version of their discontinued duochrome pigment, Prism. I loved that pigment and I was kind of bitter that it got discontinued so I’m very pleased that they created a pressed shadow similar in color. It would also make a great highlighter for lighter complexions 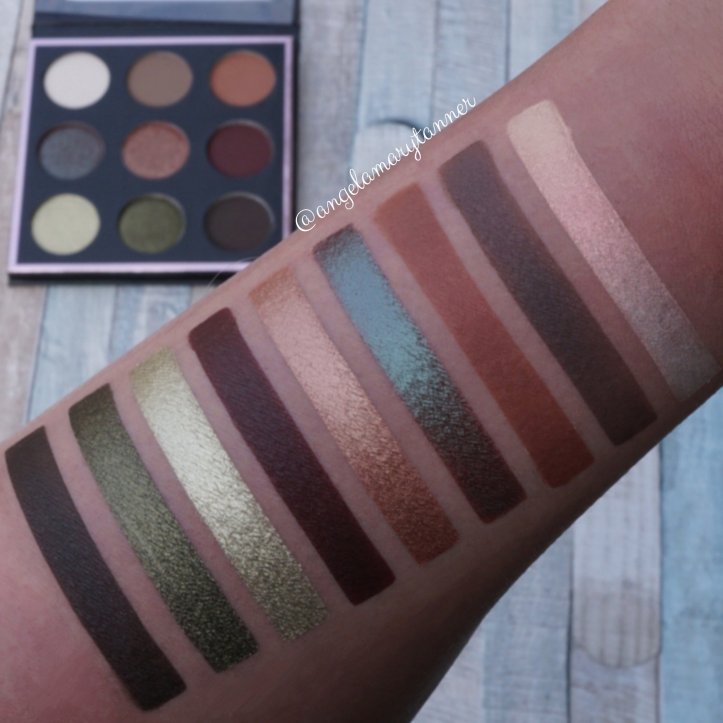 Magnifique is a mid-toned taupe. It has a smooth texture and excellent pigmentation. It would also work well as a contour shade for medium to tan skin tones. It’s somewhat similar to Faux Fur but more brown 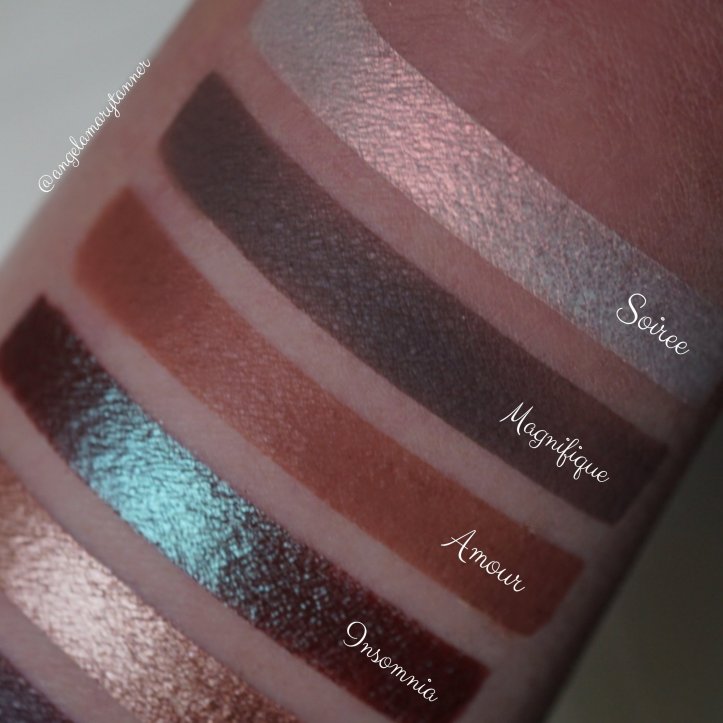 Amour is a mid-toned orange brown. It has just a touch of pearl which makes it ultra blendable while still appearing completely matte on the eye 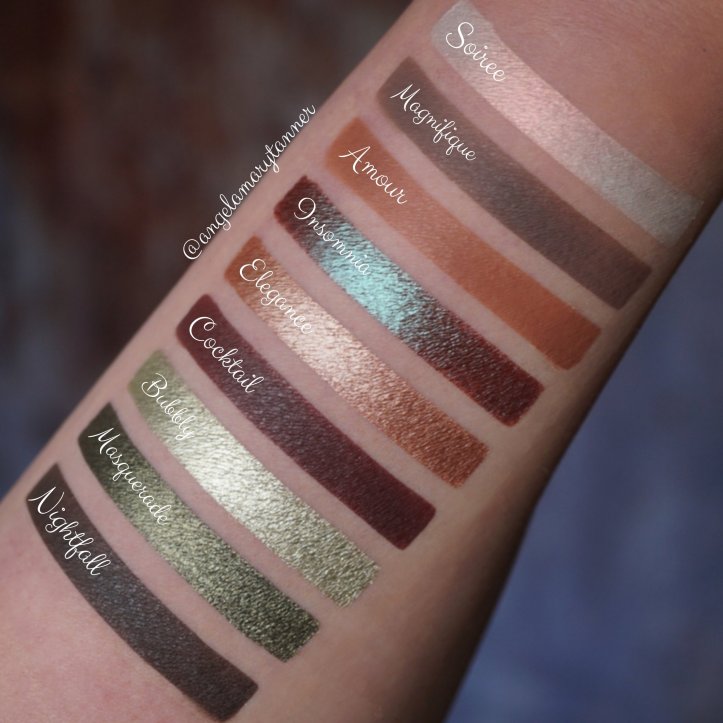 Everyone loves Insomnia for obvious reasons. It has a burgundy base with a heavy blue overlay. The texture is smooth and emollient and it glides easily over the skin without tugging. It’s definitely a color that’s been done a lot but this formula is the best, imo.

Elegance is a rose gold with MUG’s signature foiled formula. Its very similar to Grandstand 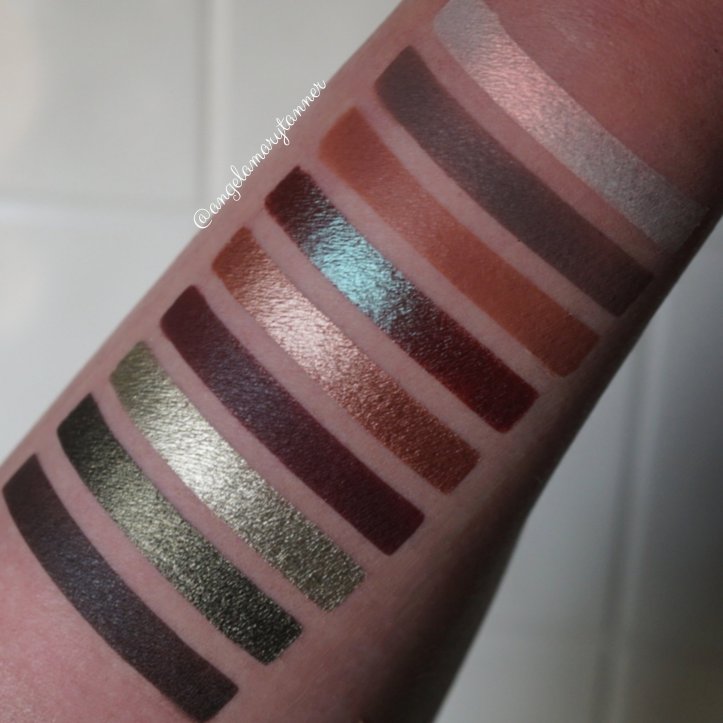 Cocktail is a deep red brown. It’s quite a bit darker than Bitten and Cherry Cola. I can do a comparison if you guys want. 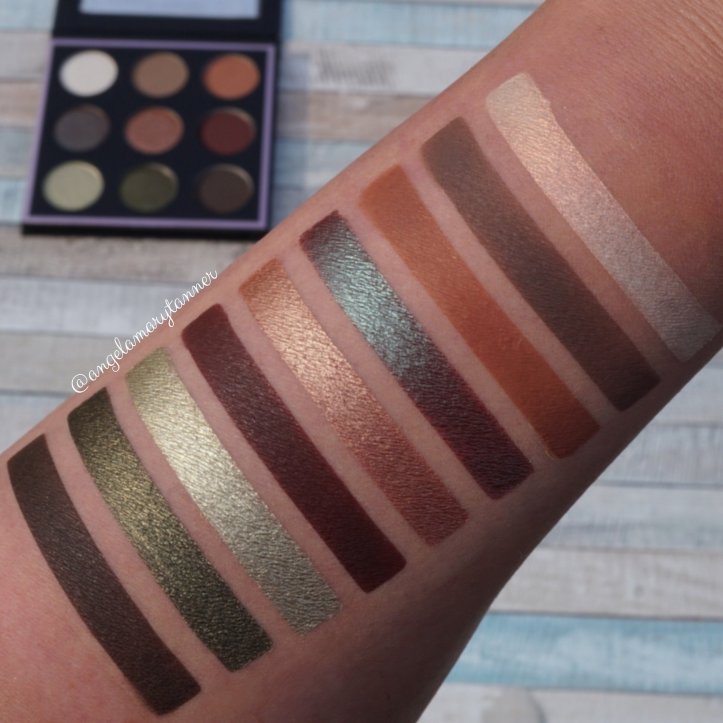 Bubbly is a green tinged champagne with an ultra metallic finish.

Masquerade is a deep moss green with gold shimmer. It’s a little confusing because they have another shade called Masquerade but it’s purple. It’s a gorgeous color but I wish that they had named it something different 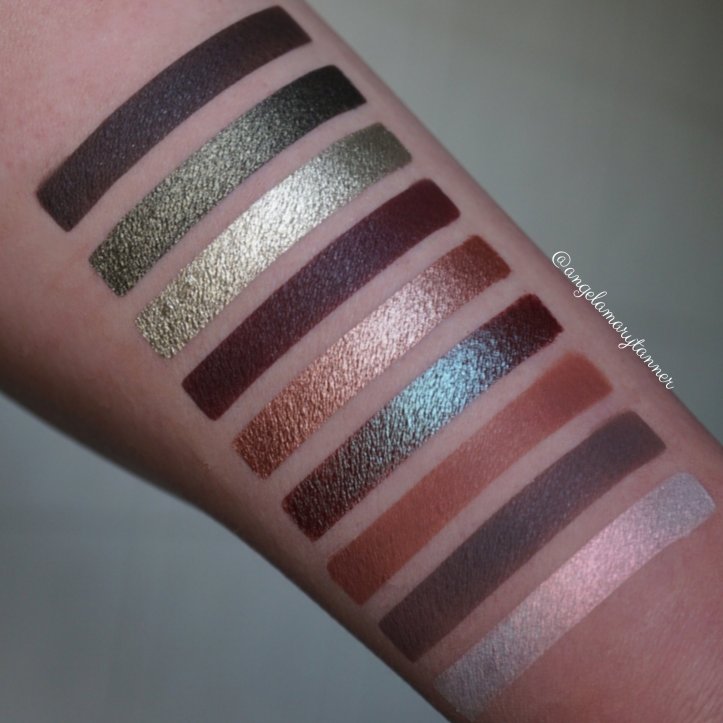 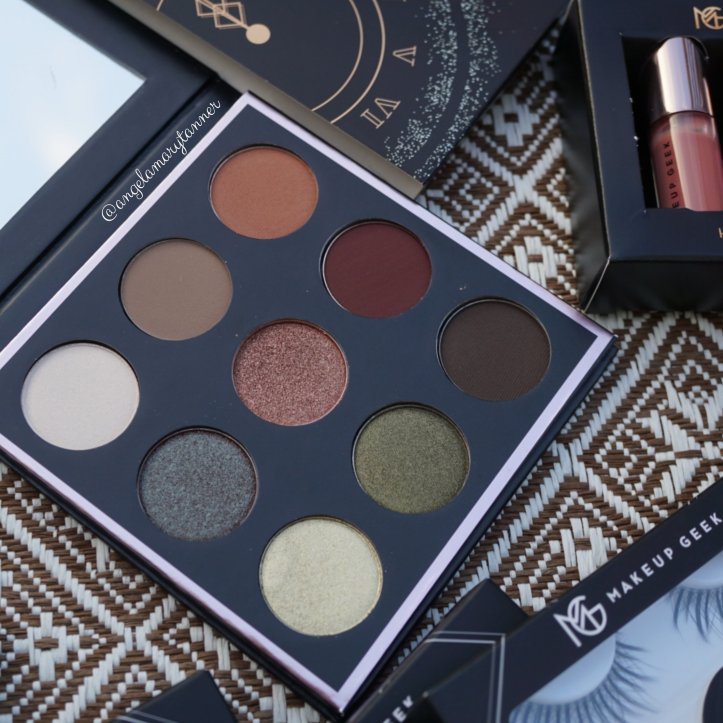 I’ve loved MUG for years and it’s still a little surreal for me to be an affiliate and receive pr from a brand that I’ve held in such high regard for so long. But here’s the thing… if you’re a MUG fan like myself then you probably don’t need this palette. There’s a few unique colors but most of these shades are very similar to their pre-existing signature shadows. I wish that had branched out a bit and created shades that were a bit more unique from their existing line. That being said, I think that the palette is beautiful and the quality is excellent.

And in case you hadn’t heard, Marlena created nine palettes for the Marste X Makeup Geek collection. They include classic MUG shades and they’re $31.50 with our affiliate code BEAUTYCULT. I’ve already swatched two of the palettes and I’ll be doing separate posts for them shortly!