A few weeks ago Urban Decay released the latest palette in their Naked series, Naked Cherry. In addition to the palette ($49) they also released a face palette ($34), 2 eyeliners ($21 each), 3 lipsticks ($18 each) and a mini version of their famous setting spray with an added cherry scent ($15). The collection is available on their website as well as at Sephora, Ulta, Macy’s. I know that I’m late to the party here but I’m going to give you my thoughts nonetheless!

Before we get started, I need to show you what an asshole my dog is… I was taking the above photo outside on my deck with my dog, Sampson, assisting. 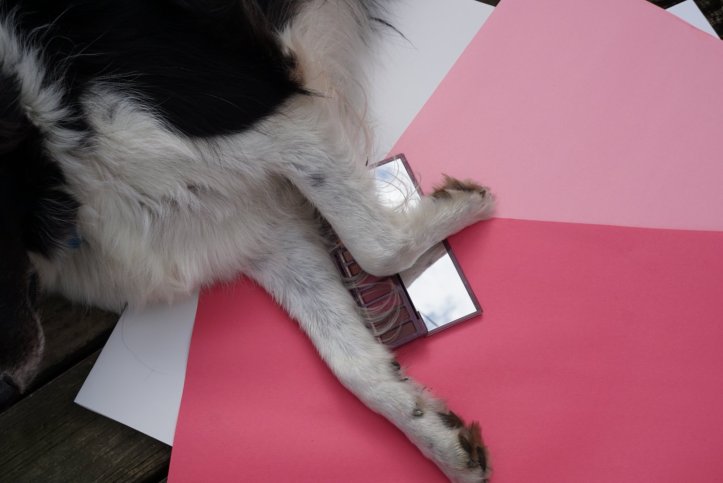 Ah! Dog’s are the best! Onto zee review! I have the other five Naked palettes and I’ve had mixed feelings about them. I like Naked Heat a lot. I thought Smoky was dreadful. I think I ended up retuning it. I liked the first three palettes when they first came out but there was also a lot less makeup in those days. Not 10,000 new palettes coming out every week like now. Urban Decay palettes have been pretty hit or miss for me but I’ve enjoyed the last few that I’ve tried, Element and Born to Run, and I’m a sucker for berry tones so Naked Cherry is seemingly right up my alley. 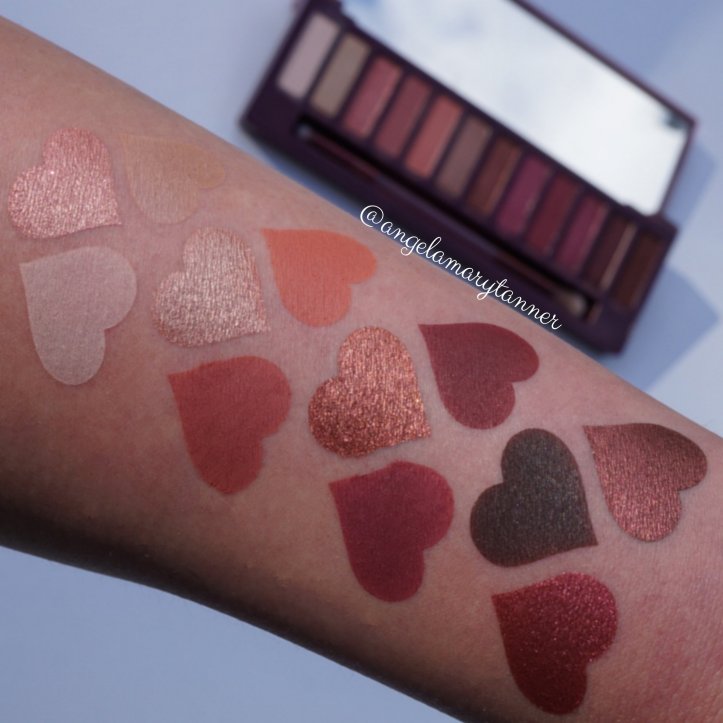 Hot Spot is an ivory matte. The color pay off is decent but the texture is thin and sort of dry with a good bit of kick up in the pan

Caution is a light beige with a hint of sheen. See what I mean about the two highlight shades? Naked Heat is the same way, matte ivory and beige. I assume that they do it to be inclusive, which is a nice idea but I don’t need a highlight in every single palette that I own. I would’ve much rather seen some more interesting berry colors 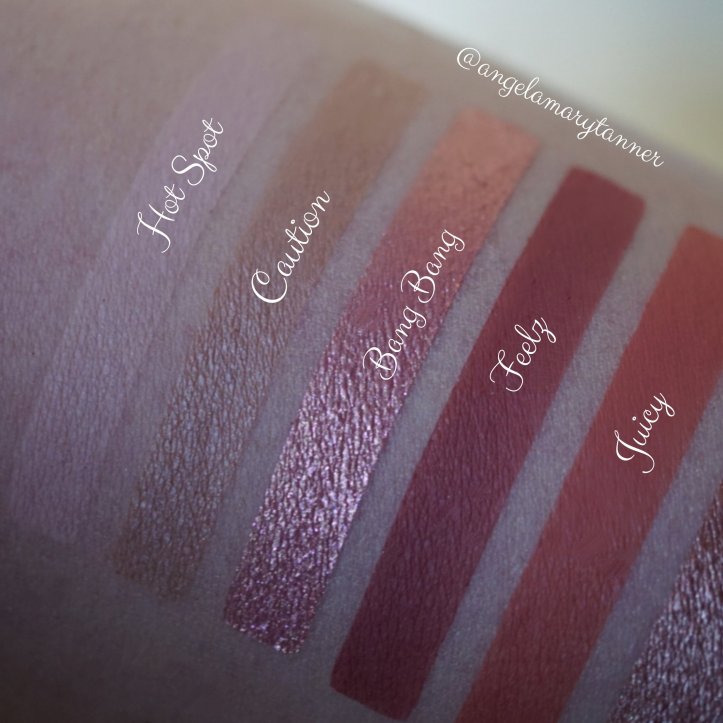 Bang Bang is a pale peachy pink with glitter. I swatched it dry but my arm was slightly tacky with lotion. On these eyes, you really need to use it wet.

Feelz is a warm rose matte. It has good pigmentation and a smooth texture but it does tend to fade a bit over time 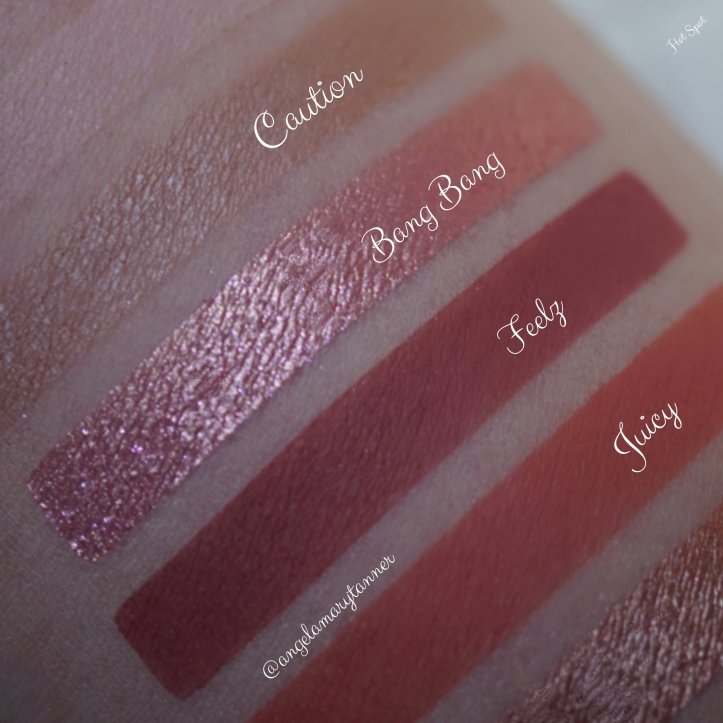 Turn On is a metallic champagne with rose undertones. It has a very smooth texture and better color pay off than Bang Bang but you still need to dampen your brush if you want it to pop

Ambition is a rosey copper metallic. The texture is creamy and silky smooth and the color pay off is better than the lighter shades

Bing is a mid-toned berry matte with mauve undertones. It’s probably my favorite shade in the palette but it does seem to sheer out when blended 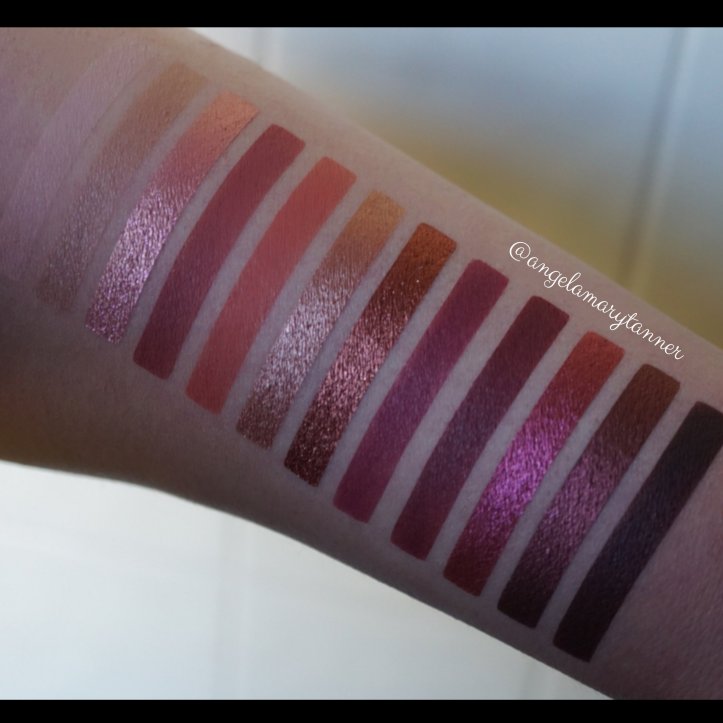 Devilish is a deep berry matte. It has a velvety texture and rich pigmentation that maintains it’s intensity when blended

Young Love is a bright metallic berry. As with most of the other shimmers, the color pay off is decent but it’s much more intense when applied wet

Privacy is a deep berry toned matte. It applies smoothly but it’s another one of those shades that seems to sheer out when blended

So to recap… overall it’s a beautiful palette. However the color scheme is very monochromatic which is somewhat limiting in terms of the variety of looks that one can create. Although it does have a few performance issues, I would’ve purchased it had I not gotten it in PR. 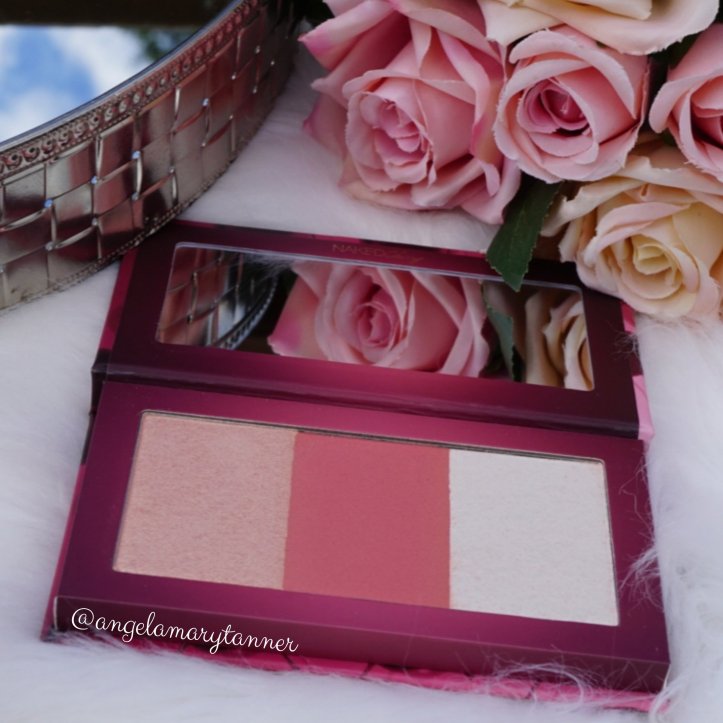 This face palette includes a highlighter, blush and iridescent topper. The highlighter is a light peachy pink with soft gold shimmer.

The berry toned blush is sheer so it flatters fair skin but but it’s buildable enough to work for other complexions as well. The last shade is an iridescent pink topper with subtle sparkle. The three shades complement each other beautifully. 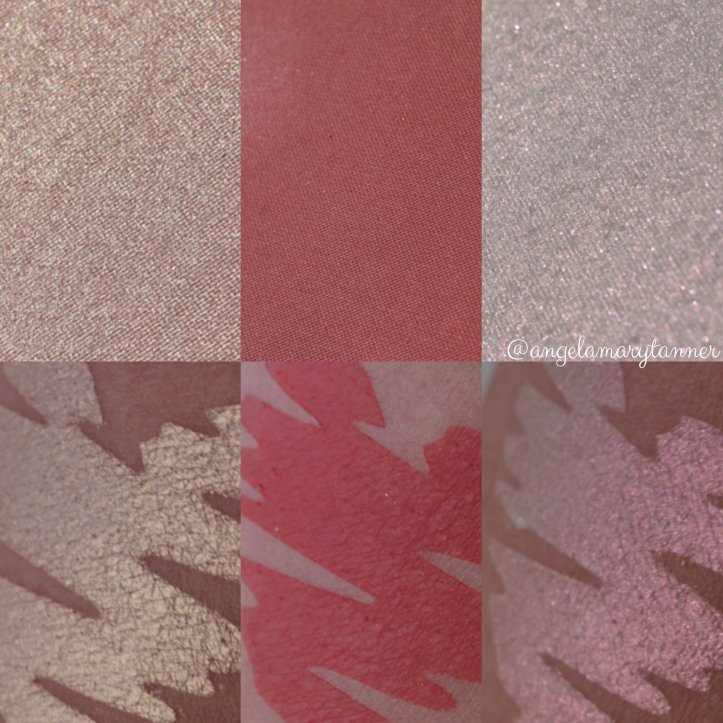 I think that it’s a really pretty palette and I’ll definitely use it but I wouldn’t have bought it. Pretty as it, I don’t find that adds anything new or unique to my collection. If you like these colors and you have fair to light skin, then I’ll think that you’ll enjoy it. I question whether or not it would flatter deeper skin tones. My instinct is no, but I could be wrong. 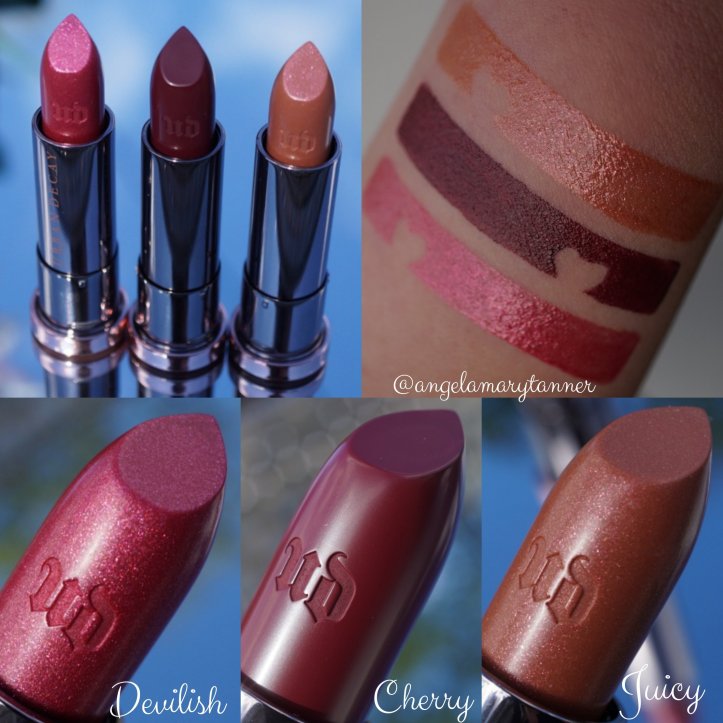 Cherry is a deep burgundy with a cream formula 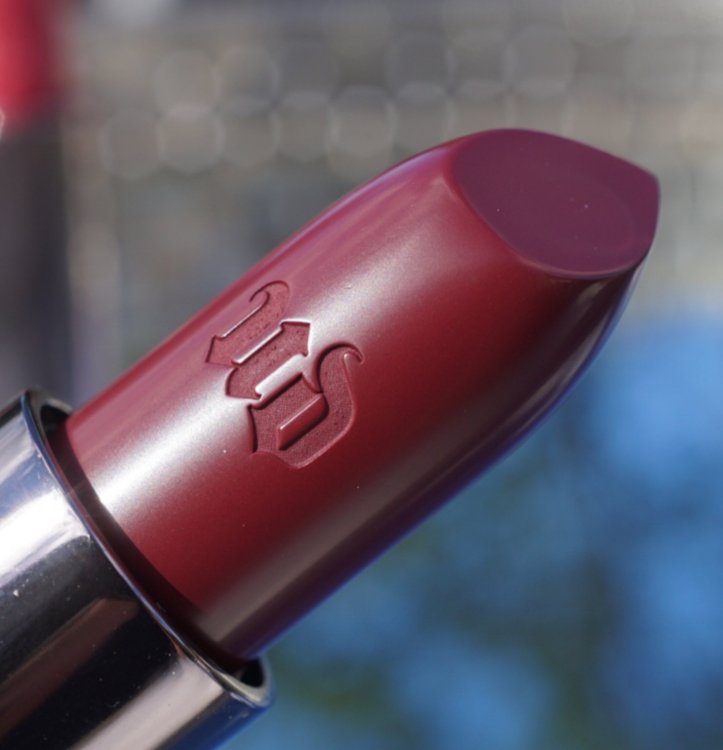 Devilish is a bright berry pink with lots glitter. It’s on the sheer side so it takes at least two layers to reach opacity and it’s VERY glittery

Juicy appears to be peach with pink glitter but unfortunately the color doesn’t translate on the lips. It’s extremely sheer, more like a glittery gloss which is disappointing because I love the color

I normally love UD lipsticks but these missed the mark for me. Cherry performed well but it’s not a color that I can pull off. The other two were too sheer and glittery. I wouldn’t purchase any of the lipsticks.

I love UD eyeyeliners! They glide on smoothly without tugging and they’re smudgable but once they set, they’re not budging 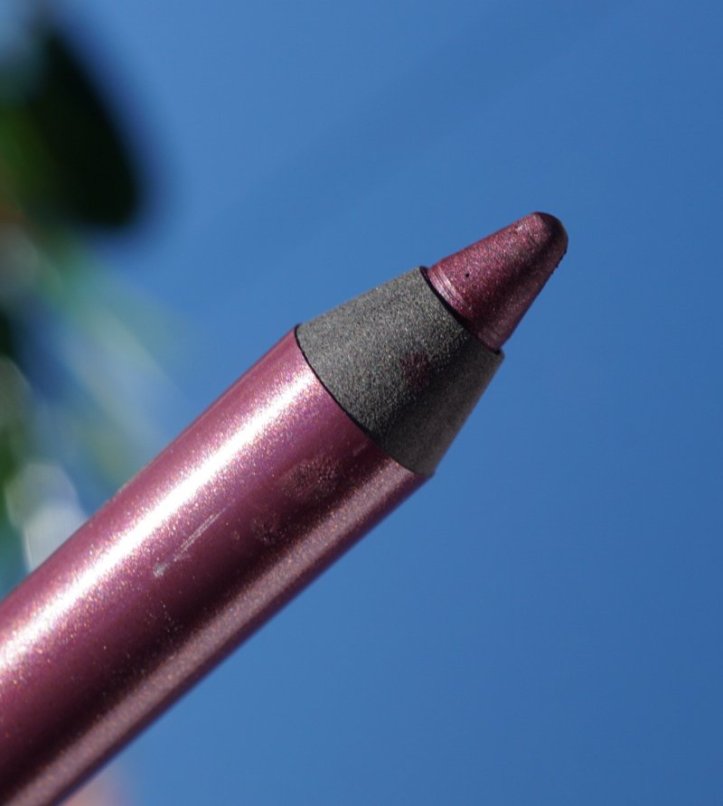 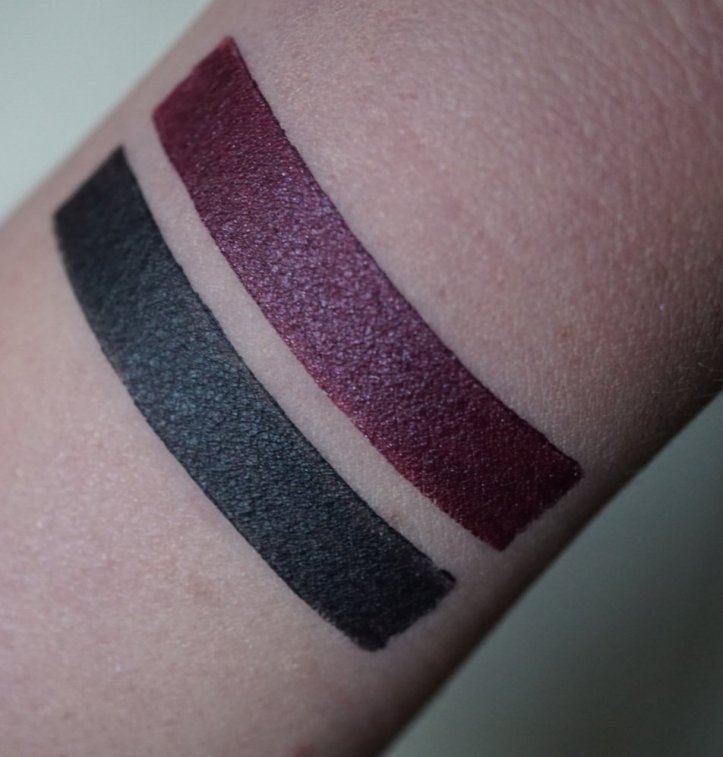 Black Market is a satiny black

I would probably buy Love Drug because it’s a unique color and it works well with the palette. Black Market is nice but I have plenty of black eyeliners

This is a mini version of the cult favorite, All Nighter setting spray with a light cherry scent and cherry themed packaging. I love UD’s setting spray and I like the scent, although I wouldn’t necessarily say that it smells like cherries. I think that you need smell it for yourself because people seem to either love it or hate it with no in between.

And there you have it! I like everything in the collection except the lipsticks but after trying everything I’d only actually buy the palette and the burgundy liner. What do you guys think about this collection??