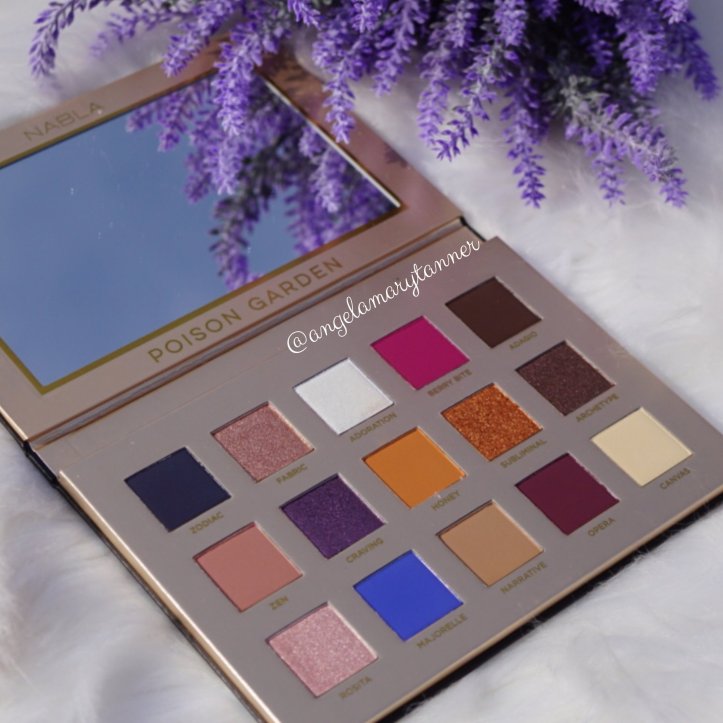 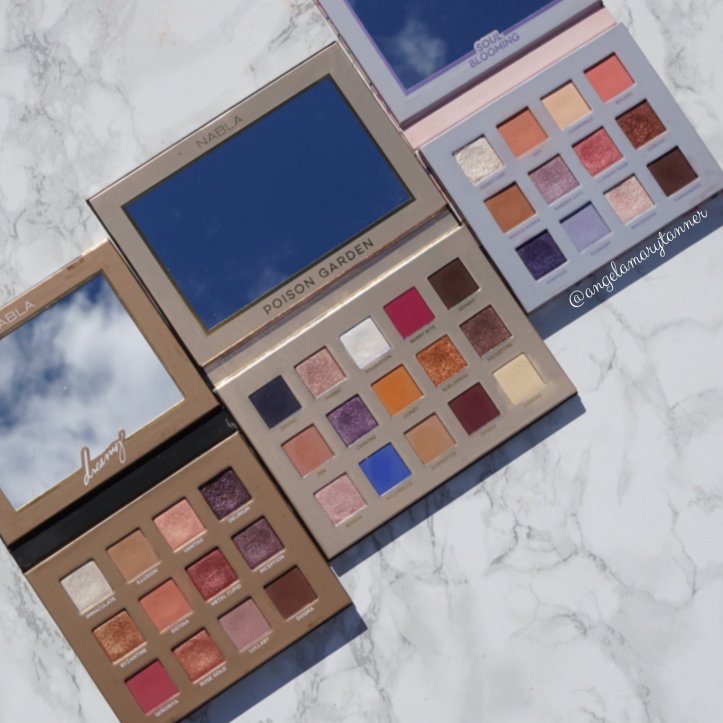 Palette number three from Nabla Cosmetics! Poison Garden drops this Thursday, November 7th. It will be available on Nabla’s website and at authorized retailers, one of which is Beauty Bay who offers free US shipping.

It’s a little bigger than their previous two palettes, 15 pans instead of 12. There’s 9 mattes and 6 shimmers. Adoration and Subliminal are their new ‘Crystal’ formula that they debuted in the Soul Blooming palette. Adoration on it’s own is quite sheer, I had to build it up substantially to get it to show up in these pics. But it is designed to be a top coat. Subliminal is also the Crystal formula but it’s more opaque and has a very glittery, almost wet looking finish.

At first the color scheme seemed a little jarring to me but then I started visualizing the palette in quads. So for example Zodiac, Fabric, Zen and Craving or Zen, Craving, Rosita and Majorelle or Honey, Subliminal, Narrative and Opera etc. It makes more sense to me when I look at it that way. Upon it using it, I’ve realized that the colors actually work really well together. I love Nabla’s eyeshadows, especially their mattes. They have great pigmentation and blendability and the colors are unique. I’ve used the palette four times now and haven’t run in to any issues so far. Okay let’s look at a zillion nearly identical swatch photos and I’ll give you the run down.

Zodiac is a deep navy matte. I think that it was a good choice for this palette. It’s the perfect shade to pair with Majorelle

Fabric is warm champagne with an ultra metallic finish. It’s one of their ‘Fluid Metals’ which is one of my favorite metallic formulas. It has the color pay off that you’d get from a foiled shadow but it’s not as heavy. Meaning that it’s more finely milled and has more slip than a typical foiled shadow. I never have creasing with this formula

Adoration… sigh. This is the one shade that gave me trouble when I was doing these swatches. It looks white in the pan and on the skin it has sparkly blue violet reflects. It’s meant to be used as a top coat so it’s quite sheer. It took me a long time to get a solid opaque swatch. When used as intended, it’s beautiful. So far I’ve used it on top of Craving and Archetype and the result was really pretty. But just know that it works better as a topper than on it’s own

Berry Bite is a matte raspberry. When packed on with a shader brush, as shown, it’s red but it blends out to a berry color. It reminds me of the red in the Manny MUA MUG palette. It’s very pigmented so be light handed

Adagio is a very dark cool matte brown. Not much to say about this one…

Zen is a soft midtoned brown with pink undertones. It’s consistent with the rest of the mattes in the palette. Pigmented with a smooth velvety texture and easy to apply and blend. It’s lighter and more pink than Middle Karma from the Soul Blooming palette.

Craving is a bold violet with pink sparkle. It adheres well to bare skin and applies easily with a brush but the sparkles will be more visible if you use a tacky base 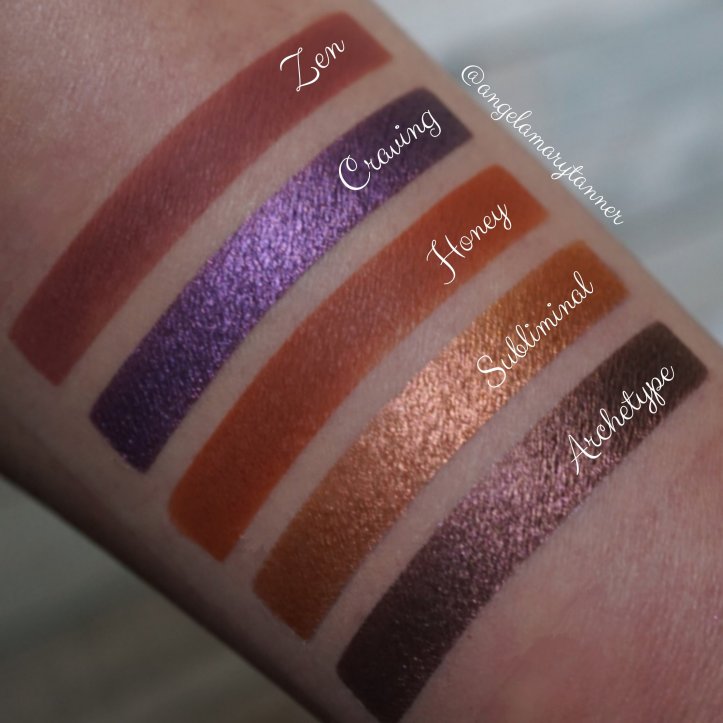 Honey is a mid-toned orange with subtle yellow undertones.

Subliminal is one their ‘Crystal’ formula shadows. It’s an extremely sparkly orange copper with hints of pink. It’s on the sheer side but it builds more easily than Adoration. It works great as a topper or you can layer until it reaches opacity. I’ve been using it with a brush but because it’s so sparkly I’d recommend using it wet or with a glitter glue.

Archetype is a deep plummy bronze. It has opaque color pay off and smooth, dense texture with enough slip that applies easily with a brush. If you’re using it as an all over the lid shade and you want to amp up the intensity, I’d recommend using it wet.

Rosita is a pale cool pink with a metallic finish. The formula is very similar to Fabric.

Majorelle is probably my favorite shade in the palette and I don’t even like blue eyeshadow. In my experience, colors like this have a tendency to be patchy or blend away to nothing. Majorelle is bomb. Great pigmentation that maintains it’s intensity when blended. Like I said I’m not a fan of blue eyeshadow but when paired with one of the pink mattes (Zen, Berry Bite) it ends up looking purple, which I love.

Opera is a deep burgundy matte. It’s not patchy but I’ve noticed that it’s a little more tricky to blend than the lighter shades unless you’re light handed. But that’s to be expected with dark shades like this

Canvas is a matte beige with yellow undertones. It’s nearly identical to my skin tone so it’s a good setting shadow for me. Lighter skin tones could use it as a transition color and deeper skin tones as a highlight shade. 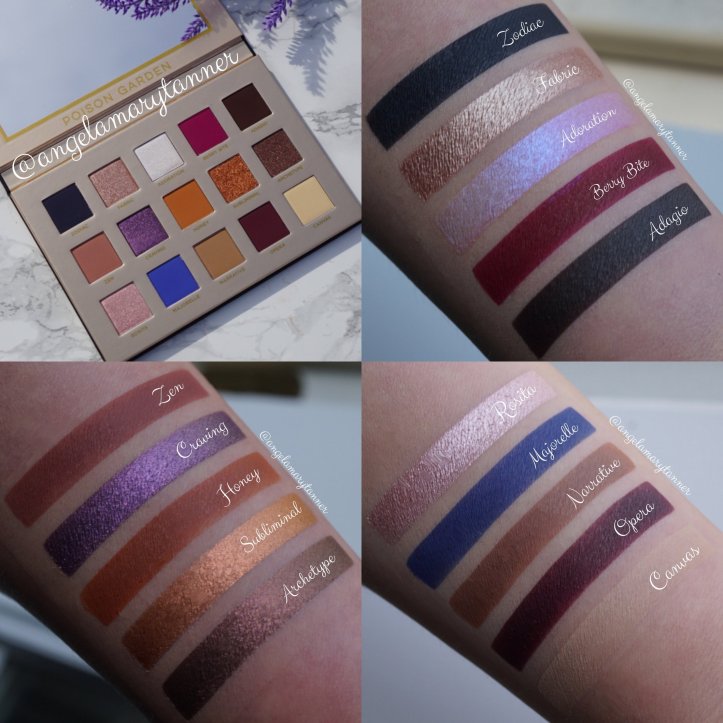 Overall I’m pleasantly surprised. Initially I wasn’t sure what to make of this color selection but after having some time to play, it makes sense to me. Nabla is such a great brand and I’m continually impressed with their products. Don’t forget that if you’re in the US, you can order from Beauty Bay and get free shipping!