I feel the need to preffice this review by saying that I’m not a big fan of Huda. Of course, I don’t know her personally but if one is to believe hearsay, she seems like a pretty shitty human being. Not that I’m here to review her personality or every business decision that she’s ever made. My point is that if I give a Huda product a good review, I do so begrudgingly. Also I tried the little Huda mauve palette last year and gave it a solid McMeh rating so I was fully expecting this one to suck too. I was cracking my knuckles getting ready to go into full hate monger mode but then I did swatches and welp… you guys… this shit’s pretty af.

First the deets… this palette is one of five in her limited edition, Precious Stones collection. In addition to her website, they’re also being sold at Sephora and Cult Beauty. It’s a simple cardboard palette with a mirror and magnetic closures. It’s tiny but the pans are only slightly smaller than average (1.1g/.04oz each) and it’s cruelty free but not vegan. Her little palettes are made in China, which probably explains why they’re only $27. And I think that’s about it… bring on the swatches!

These shadows aren’t named so we’ll just go in order, starting from the top (closer to my elbow).

The first shade is a fuchsia metallic. It’s a very pretty color but it doesn’t have the best pigmentation with a brush. It swatched nicely with a brush but that’s because I can use more pressure on my arm than I can on my eye. I feel like I could off on a tangent about how swatches are meant to show color, finish and texture and are hardly ever indicative of performance but I’ll save it for another day. On the eyes, you’ll get better (and faster) color pay off with a damp brush or your fingertip but it’s beautiful as an all over lid color.

The second shade is GORGEOUS! It’s a metallic plummy burgundy with copper sparkle and a bit of a gold shift. The formula is super emollient and I found it nearly impossible to apply with a brush. I have no problem using my fingers to apply my makeup but if you do, I’ve heard that foam applicators work better than brushes with this type of formula. 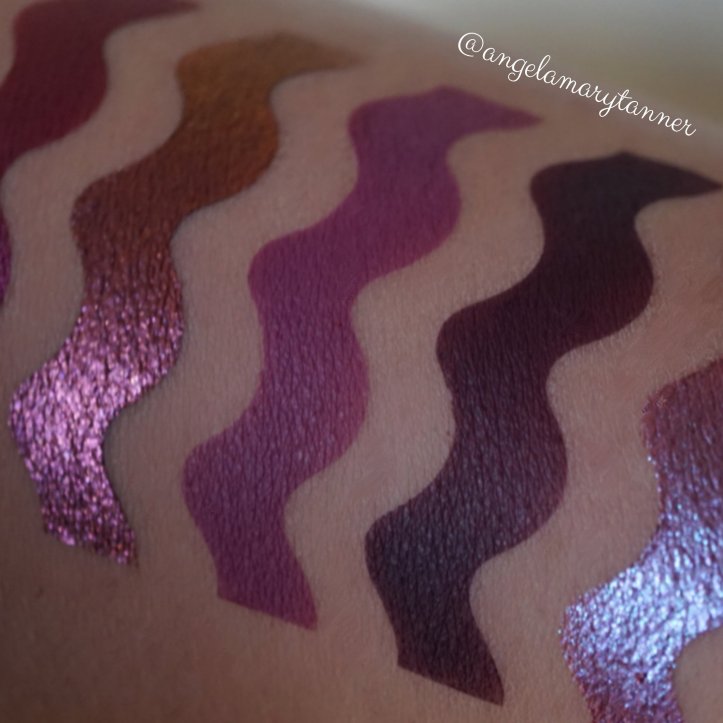 I’m not sure how to describe this third color… grape? Vibrant plum? Boysenberry? Whatever. It’s one of the three mattes in the palette and although I’m crazy about the color, the pigmentation isn’t the best (unless you pack it on) and I’ve noticed that it tends to blend in with the pink matte. It is buildable but it requires some patience.

The fourth shade is a deep burgundy matte. I’m happy with pigmentation and blendability. No complaints.

The middle color reminds me a bit of one of the shades in her Desert Dusk palette. It’s incredibly beautiful but the formula is similar to the glittery plum shade. It’s very difficult to apply with a brush. Also it’s quite glittery so I’d recommend using it with a glitter glue to prevent fallout.

The next shade is a vibrant blue purple metallic. I’ve used this one several times and haven’t had any issues applying it with brush. 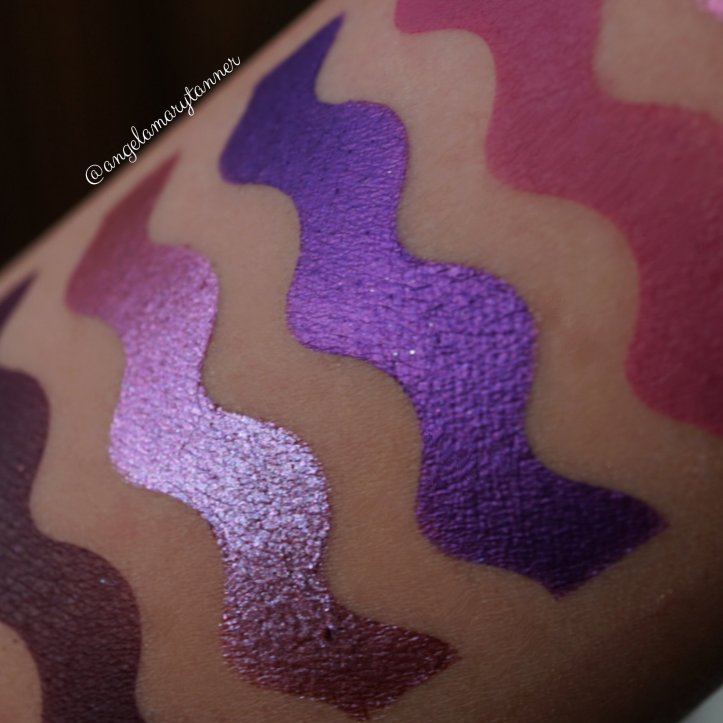 The seventh shade is a mid-toned pink matte. It has pretty intense color pay off so I’d recommend being light handed. I actually wish that it was a little less pigmented so that I could use it as a transition color. But I’m pretty fair so it’s probably a perfect transition color for medium skin tones.

Second to last is a super glittery white pink. This one applies okay with a brush and the formula is fairly emollient so adheres well to bare skin. Since it’s somewhat sheer, it makes an ideal lid topper. 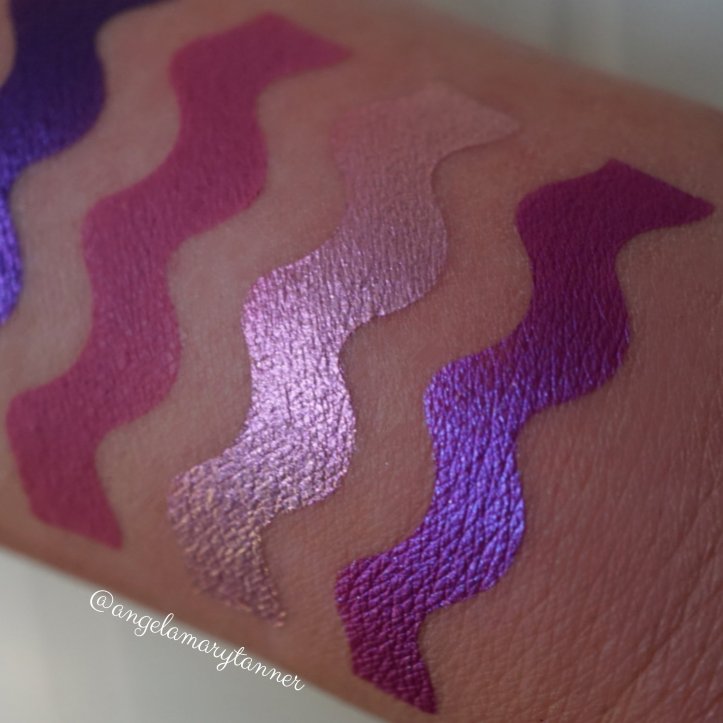 The last shade is a vibrant orchid with a blue shift. It’s like a darker version of Mac Stars N Rockets. The formula is similar to the burple that’s above it in the palette.

Final thoughts? I’m pleasantly surprised. I love colors like this because they’re complementary to my green eyes. My only complaint is that I wish that the plum matte was more pigmented. Other than that I’m a happy camper. However half of the shades are a pain in the ass to use with a brush. Personally, I don’t mind using my fingers and glitter glue or setting spray. But if you have long ass nails or can’t be bothered to hunt for fix + then this may not be the palette for you. I’ve used it four times this week and I’ve barely even left my house. The only problem is that now I want the other four…