Mother is at it again boys and girls!! This week she’s dropping the 5th installment of her Mothership eyeshadow palette series! It’s available now at Patmcgrath.com and should be dropping at Sephora any minute now.

In the interest of full disclosure, I need to let you know that this isn’t going to be a neutral review. I do swatches for Pat’s social media and I’m extremely biased as a result. I’d sooner cut out my own tongue than speak ill of Mother. So yeah… don’t take my review as gospel because in my eyes, Pat McGrath can do wrong.

As you probably know, these palettes are VERY pricey at $125 a pop. Yikes! Why so much you ask? When it comes to luxury makeup (luxury anything really), at least half of your money (likely more than half) is going towards packaging. And these palettes have the best packaging that I’ve ever seen. They’re made from black enamel and they’ve got some serious weight to them. The palettes also have beveled mirrors, brass accents and they’re made in Italy. Plus the shadows are amazeballs too.

P.S. You might notice that the swatches switch order occasionally… it’s because I did several sets of swatches with slight variations for Pat and I have all of my photos jumbled together. Okay! Bring on zee swatches! 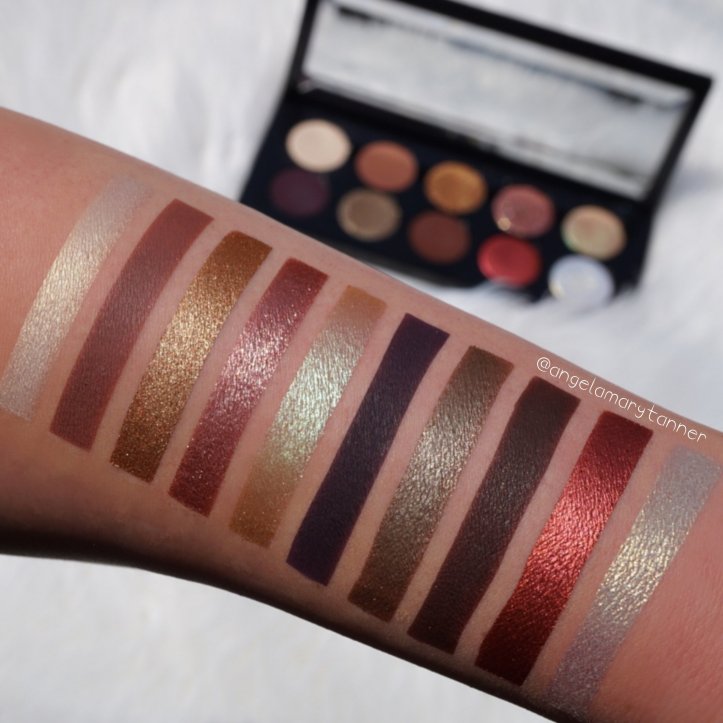 Skinshow Divine Glow is a satiny white gold. All of the Mothership palettes have several different formulas. My favorites are the four glitter formulas, that are on the right hand side of the palettes. My second favorite formula is her satin finishes, like Skinshow Divine Glow. They have a smooth, creamy texture that’s very user friendly and the finish looks natural and glowy on the skin. This has been my go to brow highlight for the last month.

Guilty Pleasure has satiny taupe base with tiny flecks of bronze sparkle. I don’t even like taupe and I’m in love with this color!

Entrapment is a mid-toned tawny matte with soft mauve undertones. Pat’s matte formula is very pigmented so you’ll want to be very light handed and build slowly. Since I’m fair, I have to be very gentle if I want to use Entrapment as a transition color.

Disobedient is a deep mahogany brown with a matte finish. Those flecks of sparkle you’re seeing is fall out from other shadows. I’m an aggressive swatcher. And I refuse to photoshop swatches 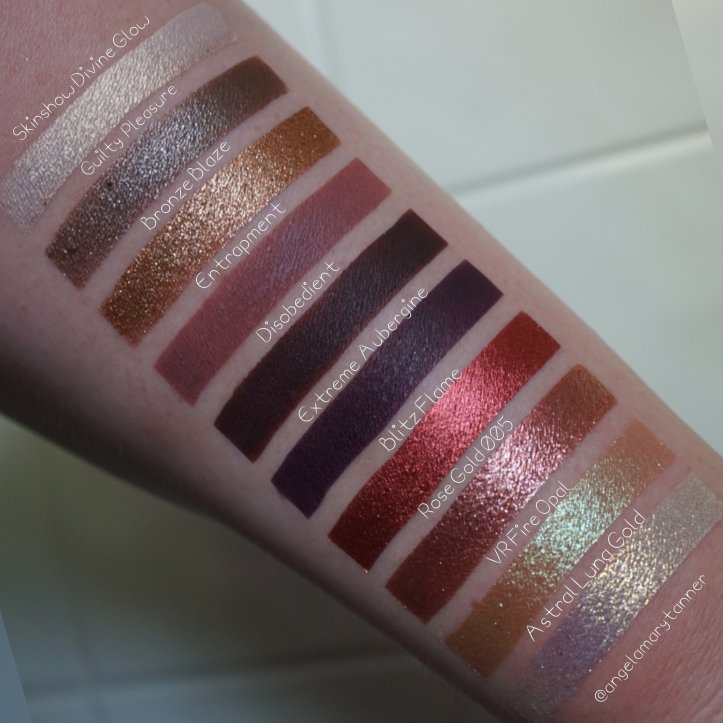 Xtreme Aubergine is a blackened eggplant matte. I love colors like this in place of a traditional black matte. You get all of the definition but it’s a little softer and less harsh than a black. Again this baby is pigmented af so be light handed or else you might have a mess on your hands.

Blitz Flame is a bold metallic crimson. The texture is so finely milled that it has an almost wet appearance on the skin. All of the Mothership palettes (except Decadence which was LE) have a ‘Blitz’ shade with a similar formula. Mothership I, for example, has Blitz Blue. 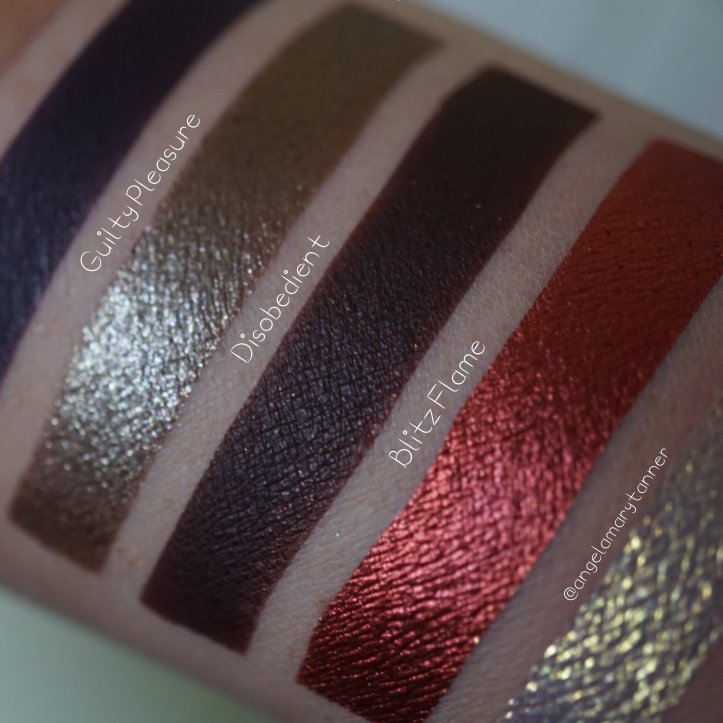 Rose Gold 005 is an ultra metallic pinky rose gold with gold sparkle. The formula is the same as Bronze 005 and Pale Gold 002 from the other Mothership palettes. 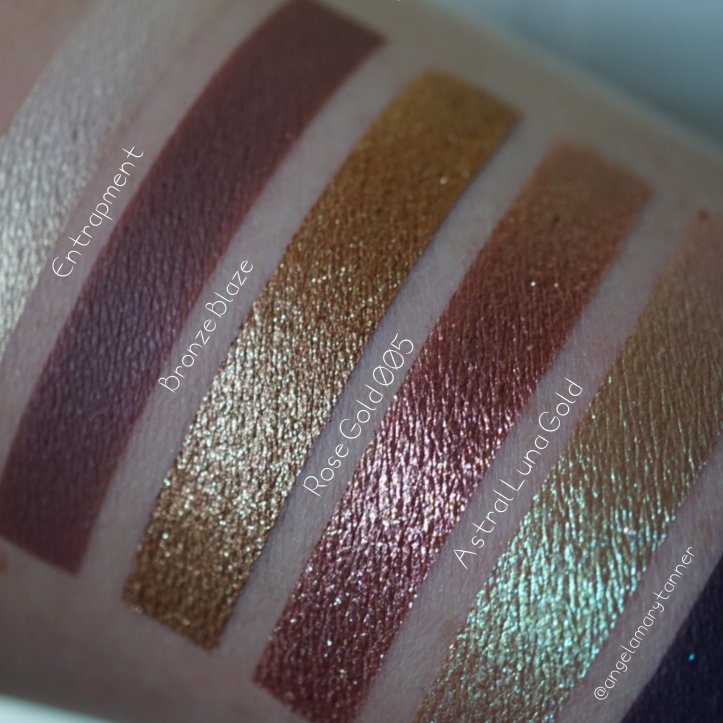 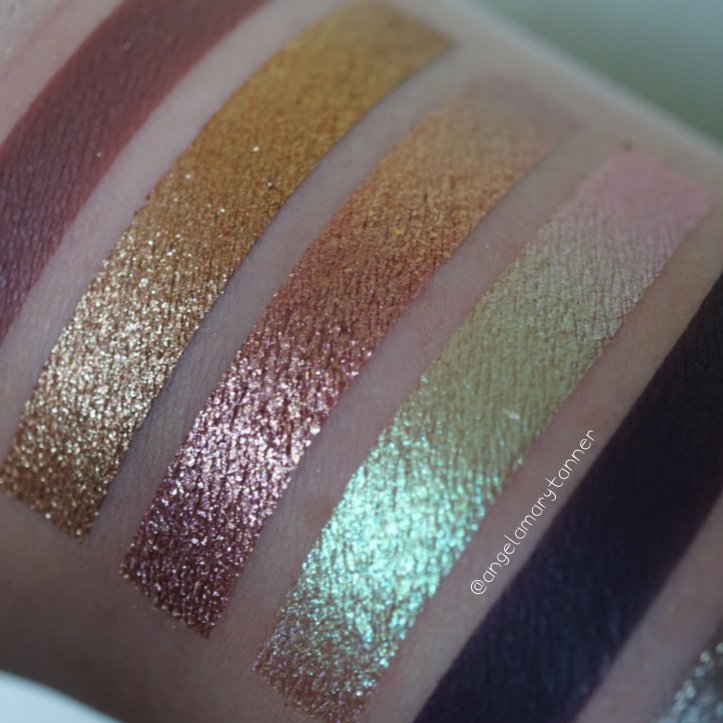 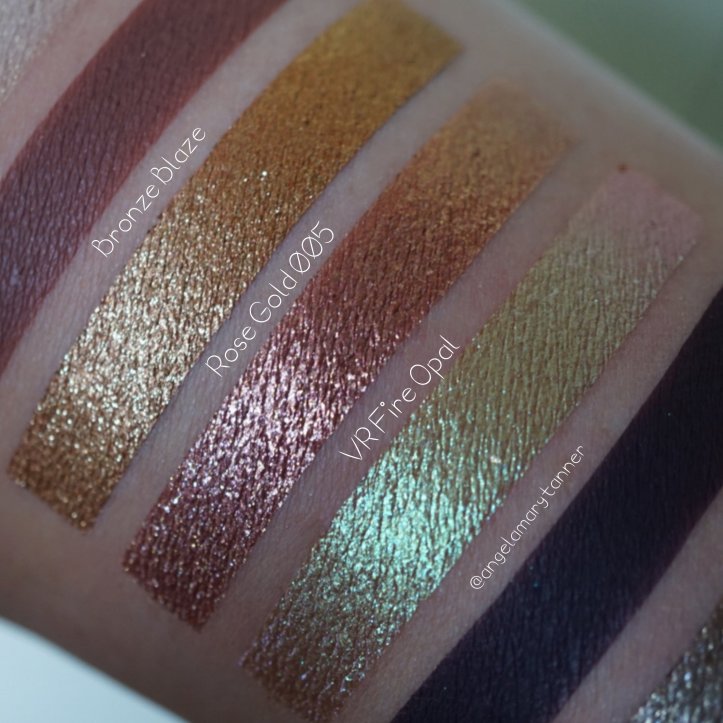 VR Fire Opal inspires me to write poetry about nature and beauty and shit. It’s the coolest color ever. It’s very sparkly and sheer but buildable. If you apply it with a brush, it’ll serve as gorgeous lid topper or you can use your finger tip to get more intense color pay off. I’d say that the base is light yellow brown and it’s topped with an intense duochrome iridescence that shifts from a warm lime green to a cooler mint green to blue and pink. Same as with ‘Blitz’ the Mothership palettes all have a ‘VR’ shade as well. For example, Mothership II has VR Nectar

Astral Luna Gold is super glittery white gold. The glitter has a very fine texture and it’s suspended in a somewhat emollient base so you don’t NEED a glitter glue (I use one anyway to prevent fall out) but it applies best with your fingertip. All of the palettes also have an ‘Astral’ shade as well.

The Mothership palettes also have the same layout. So the ‘Astral’ shade is all of the way to the right in the bottom row, with ‘Blitz’ to it’s left and ‘VR’ above in all four palettes. Just an fyi. I found it interesting.

And there you have it! Mothership V Palette – Bronze Seduction! As I mentioned in the intro these palettes are extremely expensive but I can justify the price because of the amazing packaging and the unique nature of her glittery formula. I love the satins and metallics but I don’t find them to be as unique. Lastly I like the mattes but they haven’t made an impression on me the way that the glitter shades have. High end makeup is a luxury. You don’t NEED it but I think that you might deserve it 😁

Oh! One more thing! If you go on Sephora’s website and presumably Pat’s as well, there’s an instructions section where Pat clearly explains the best method of application for each shade.

What do you guys think?? Will you treat yo self or remain strong?