OPV BEAUTY ‘YEMOJA’ PALETTE
New palette alert!! This is the Yemoja palette from OPV BEAUTY! The palette was inspired by a Nigerian goddess from the Yoruba religion. She is known as the protectress of women and children. Very cool concept! Opv is based in London and before this palette, I had no idea that the owners were Nigerian. The colors are speaking to my soul so let’s hope they perform as good as they look!

The palette is £29 and we have an affiliate code with OPV, BEAUTYCULT for 10% off. With the exchange rate it’s around $34USD or $43USD with shipping costs ($47 without the code).
Tada! We have swatches! 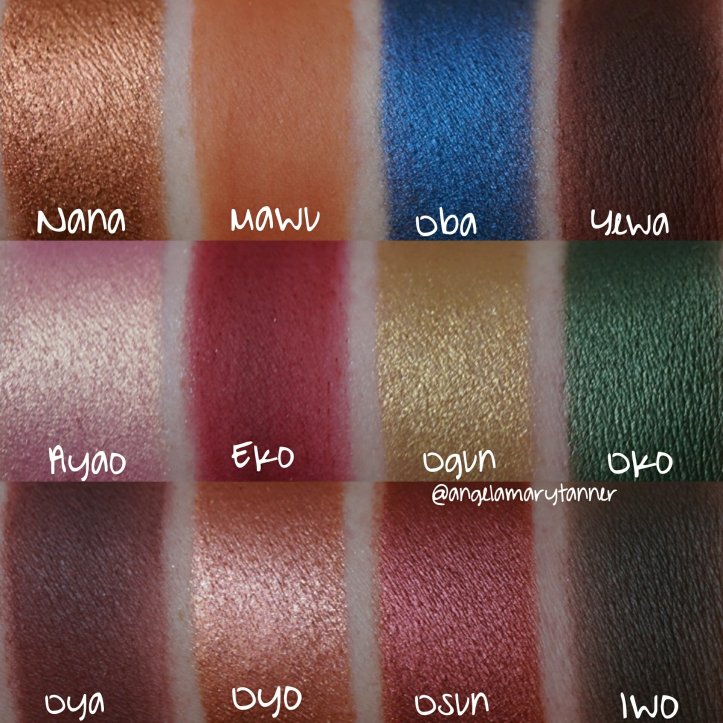 I just got this palette yesterday and I’ve only done one quick look so these are just my initial thoughts. As I stated previously, it retails for £29 and our affiliate code BEAUTYCULT will save you 10%. I really like how different this is from their previous palettes which were all the 35 pan palettes that a lot of companies make. This one feels much more personal as it’s meant to be a homage to their country. The design and lay out is nearly identical to Nubian 2. 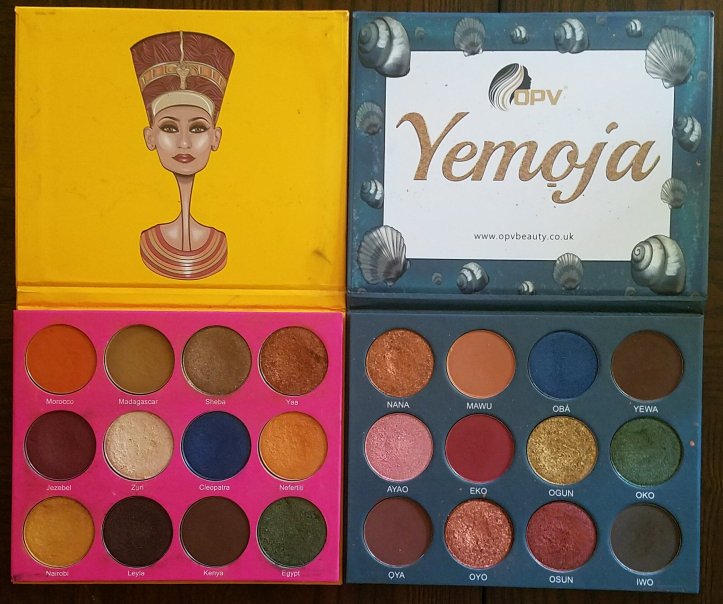 There are a number of similar shades especially the blue and green but I wouldn’t say that they’re exact dupes. And the ingredients are different.

There’s 12 eyeshadows: 5 mattes, 4 shimmers and 3 foiled. The foiled shadows will apply better with your finger but I was able to do all of the swatches with brushes except the gold. I still applied the color using a flat brush but I smoothed it with my finger because it was a little uneven. But yeah besides that one color being a little tricky, everything else swatched really nicely.

Nana is a foiled copper. The texture is creamy, it has excellent pigmentation and it applies smoothly with a brush

Mawu is a light orange matte with yellow undertones

Oba is a royal blue satin.

Yewa is a rich warm brown with a matte finish.

Ayao is a light pink with gold shimmer.

Eko is a medium red matte. It swatched a little patchy but applied smoothly on the eyes.

Ogun is a foiled gold. This is the one that gave me a some trouble. It’s a little on the chunky side and applies much better with your finger than a brush.

Oko is a satiny forest green.

Oya is probably my favorite color in the palette. It’s a reddish brown with mauve undertones. And it’s fairly unique. I can’t think of a dupe for it off the top of my head. Abh red earth is similar but Oya is more mauve. *Update- ‘Bossy’ from the Huda rose gold palette is close

Oyo is a foiled pinky copper. It’s a beautiful color (there’s a similar shade in the Huda palette). You can apply it with a brush but your fingers would do a better job.

Osun is a metallic ruby.

Iwo is a deep matte brown.

I just realized that there’s actually a bunch of similar colors in the Huda palette. I count 8. I wouldn’t necessarily say that they’re dupes because the Huda formula is different but they’re alike enough that you could get similar looks using either palette.

It’s a beautiful palette. Nothing we haven’t seen before but the quality seems to be pretty nice and I love how they took inspiration from their home country. Based on how nicely it swatched and applied on the eyes and how pretty the colors are, if you live in the UK I’d say go for it! If you’re in the US, it would set you back around $43 with shipping which is kinda steep.

So what do you guys think?? Will you be getting the Yemoja palette?