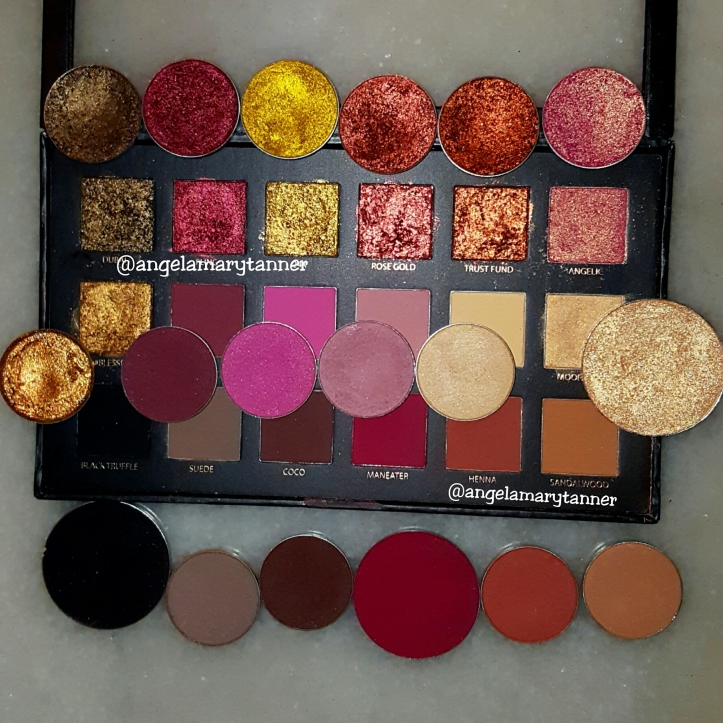 Recently HUDA BEAUTY released their much anticipated first eyeshadow palette. It’s turned out to be somewhat controversial for a number reasons. First of all it’s pretty expensive at $65. Not to mention the $20 shipping charge from Dubai to America. Secondly the launch didn’t exactly go smoothly, to say the least. It was typical of what happens when a smaller brand releases a hyped up product and their website isn’t prepared to handle all of the traffic… the launch was delayed a few times, the website ran extremely slowly and crashed several times and the palette ended up selling out in a matter of days. And now that paying customers are receiving their palettes, the reviews are mixed.

I posted my review and swatches a few days ago, if you’d like to see my thoughts. My feelings are as mixed as the reviews. I like the palette but I hesitate to recommend it for a number of reasons. The packaging is very flimsy and not what I’d expect from a $65 palette. And I’m also not sure that it’s worth its price tag but the biggest reason that I can’t fully recommend it is the metallic shadows. It’s a tricky formula and people seem to either love it or hate it. The formula ranges from difficult to impossible to apply with a brush depending on the shade. Personally I don’t mind using my fingers but a lot of people hate it. I keep my nails pretty short because I’m a mua but I know what a pain in the ass it is to use your fingers to apply eye makeup with long nails. If you don’t end up gauging the shadow pan when picking it up, you still have a 50% chance of impaling your eyeball when you’re trying to apply it. I’ve also heard complaints about it being unsanitary. I’m planning on doing a post next week about how I sanitize my makeup. The matte formula is decent, IMO but it didn’t blow my mind. And the whole palette is easily duped. So for these reasons I’m advising everyone to wait until it comes to sephora so that you can swatch the shadows and see for yourself. I would hate to influence someone to buy this palette and have them end up hating it. But don’t you worry guys! In the meantime I’ve got you covered with dupes!

In all the photos the dupe is swatched first and the Huda swatch is second. These are not all exact dupes but they were closest colors that I could find that were sold individually. Later I’ll be comparing the Huda palette with the ABH MODERN RENAISSANCE palette. I’m certainly not suggesting that you buy all of these suggestions but you may only be interested in a few of the 18 eyeshadows in this palette. Or you may find that already have some of the dupes in your collection.

The MAKEUP GEEK FOILED EYESHADOWS and ABH TITANIUM FINISH SHADOWS aren’t exactly the same as the HUDA metallics but the formulas are at least comparable. 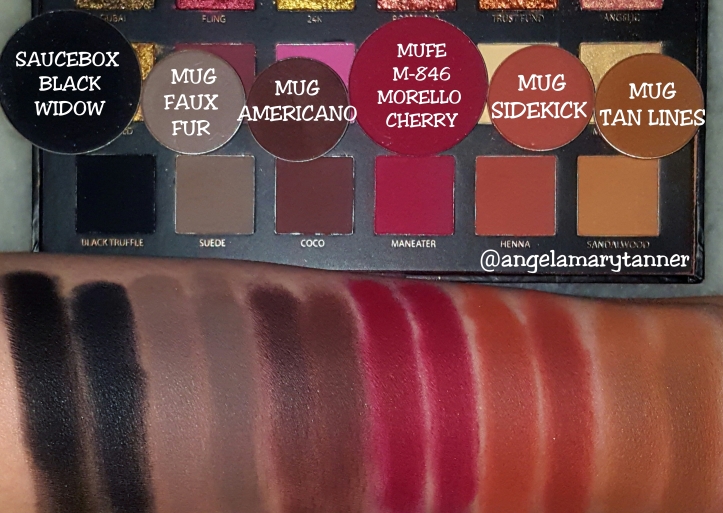 And there you have it! Dupes for the whole palette! I hope you guys found this helpful and that you already have some of them in your collection!