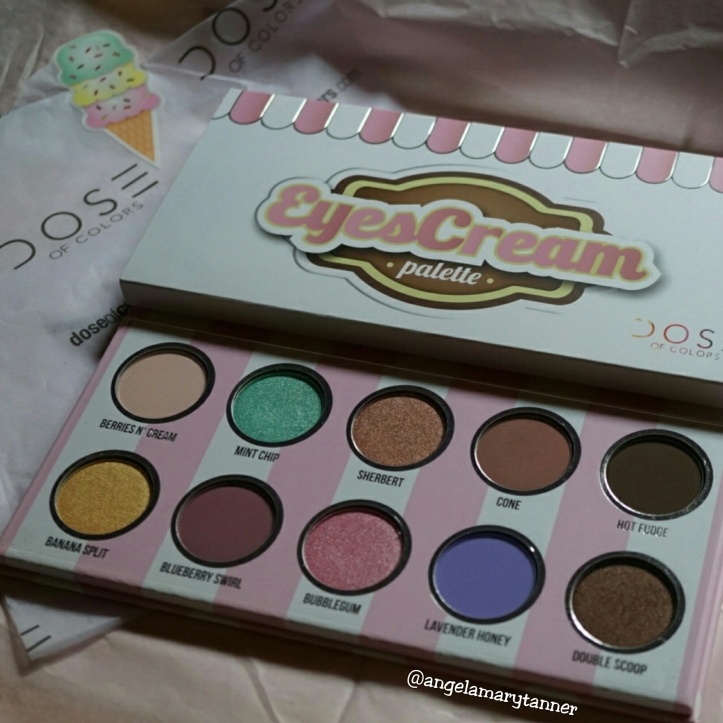 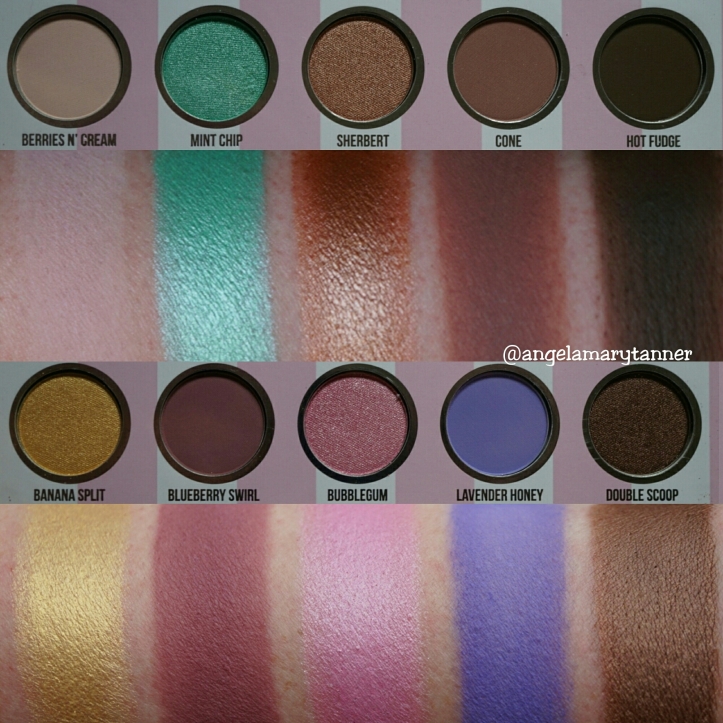 Yesterday Em posted her swatches and a mini review and today I’m going to give you my thoughts. First of all Em sent this to me as an early birthday present so it gets at least 10 extra points for that. For the most part I agree with her assessment but we had trouble with different shades. I’ll break that down a little further as we get into the review.

But first, a few quick notes about how it compares to their previous palette. HIDDEN TREASURE had .93oz of product. EyesCream is the same price but only has .49oz. This kinda annoys me. It works out that each pan is around .05oz which is pretty standard but that’s still a very large drop from their last palette. Especially since the price point is exactly the same.

Also the formula of the foiled shadows seems to be different. In HIDDEN TREASURE there were really large pigment particles that were sort of loosely pressed. This makes for a really pretty, dramatic look but can be very messy. The foiled shadows in the EyesCream palette are smoother. I like both and don’t have a strong preference either way.

I played around with it some this afternoon so that I could give you a somewhat educated review. I used all the mattes and 3 of the shimmers and with one exception, I was really happy.

These mattes remind me a bit of NATASHA DENONA’S. They’re pigmented and soft but if you aren’t gentle when you blend them, they have a tendency to sheer out. The shimmers were consistently good for me. They have the dense texture that you’d expect but as I mentioned before, they don’t have the large pigment particles that the previous palette did.

Berries n’ cream is a matte vanilla. Semi sheer color pay off and a smooth formula. Really nothing special. It’s a matte off white, there’s not much more to say about it.

Mint chip is a foiled mint green. The texture is dense but still blendable.

Sherbert is probably my favorite out of the shimmers. It’s a medium coppery bronze that reminds me ABH RUM CAKE from the LAVISH PALETTE.

Cone is a medium mauvey brown along the lines of MUFE PINKY BROWN or MUG WILD WEST. It’s very pigmented and easy to blend.

Banana split was one of the colors that Em didn’t love. I liked it though. It’s a bright true gold and I found the formula to be consistent with the other shimmers.

Blueberry swirl is my favorite color in the palette. It’s a medium dark mauve berry color. I don’t think that I own another color exactly like it. Or at least I can’t think of one off of the top of head. However this is one the colors that sheered out on me when I wasn’t gentle with my blending.

Bubblegum is the second color that Em wasn’t crazy about but that I enjoyed. It’s exactly what it’s name suggests, a light cool toned bubblegum pink with a dusting of silvery shimmer. It’s maybe not a color that I’d reach for on a daily basis but I used it on the center of my lid earlier and I liked the effect.

Lavender honey was the problem child for me. Em’s swatch is beautiful and she said it applied really nicely for her. But for me it was a different story. It swatched really patchy and applied even worse on my eyes. Most brands seem to struggle with matte purples so I wasn’t surprised that it was problematic. Next time I attempt to use it, I’ll apply a really good primer and set it very well.

Double scoop is a dark bronzey metallic with red undertones. The formula was similar to that of the shimmers. Dense but still easy to blend.
I love MINT CHIP, CONE, BLUEBERRY SWIRL and SHERBERT and I like all the rest (except for LAVENDER HONEY) I think the color selection is fun and unexpected and I see myself using this palette a lot. It is LE so if you’ve been on the fence about whether or not to get it, you should decide soon before it’s too late!

Well excuse me while I am under the weather. THESE LAUNCHED! 10% off with code BEAUTYCULT
Round of applause to @deandranicoleee for capturing these swatches of the dark and deep dark spectrum of the new powders dropping TOMO!
Swatches of the new Super Shock Shadows (and repromoted )
Swatches! Yes I am posting them with names in the next post!
@acebeaute released not one but two new palettes! 10% off with affiliate code BEAUTYCULT
TODAY 1/4 10am PST / 1Pm EST @colourpopcosmetics: Lunar Year Collection! Celebrating the year of the Tiger 2022!