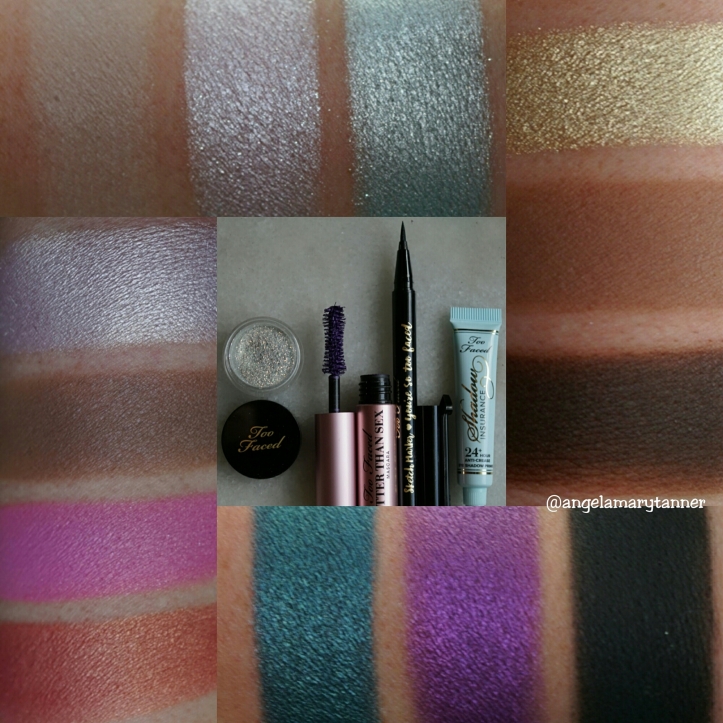 We’ve been hearing about this collaboration between TOO FACED and NIKKIE TUTORIALS for months now and at long last, she’s finally here! It’s $56 and is being sold at toofaced.com as well as Sephora (sold out) and Ulta. The design of the palette is the same as last summer’s VEGAS NAY collab, a slim cardboard palette and a mini glitter, mascara and eye primer. This one also includes a full sized liquid liner which explains why it’s $56 to last year’s $45.

One of the ways they cut costs for these collabs is on the packaging. TOO FACED generally makes sturdy tin palettes with nice mirrors. This palette is a much cheaper cardboard material without a mirror. This doesn’t bother me. Personally I prefer the more compact packaging and I never use the mirrors.

I’ve heard a lot of talk about how similar this is to the VEGAS NAY PALETTE. I looked that them side by side and yes there are some definite similarities. There’s overlap in about 7 colors. Both palettes have a matte black and white, a medium warm brown and darker red brown, a glittery gold and a pink and a purple shimmer. However none of these colors  (except maybe the black) are exact dupes. In my opinion they’re different enough to justify having both.

Another popular topic of discussion is the general similarities in all Too Faced palettes. This was my biggest gripe about the SWEET PEACH PALETTE. I felt like I’d seen all of those colors before in the brands other palettes. To be fair Too Faced has been around a long time and they’ve released a ton of palettes. So of course there’s going to be some overlap in colors. And this is true for any brand. In regards to THE POWER OF MAKEUP palette while the colors aren’t very unique, I didn’t find that there were many exact dupes that jumped out at me right away. But I’m sure that if I dug through my collection, I could find some.

One thing I appreciate about this palette is that they used pre-existing shades for the two blushes and the bronzer and highlighter. That way it’s up to the consumer to say, ‘okay I already have this blush and bronzer’ and can use that information to decide whether or not they’d still like to purchase. It really annoys me when a brand will make an eyeshadow a half a shade lighter or darker, slap a new name on it and market it as a new color. Like URBAN DECAY, their matte black is called BLACKOUT all the time, they don’t have a new black in every palette they release. Okay. I’m going off on a tangent here. Let’s get back the review.

I like TOO FACED and NIKKIE TUTORIALS so I really wanted to love this palette. I tried talking myself into liking it. But I just don’t. There’s some definite high points but there’s also so many problems. Let’s start with the shadows.

ROW 1: this top row was extremely problematic. I ended up having to redo the swatches this morning because my first attempt looked awful. This time I used a primer first and they swatched a little better. The texture of all 3 is really dusty. IVY looked white when I first applied it but it faded within a matter of minutes. Same with SUGAR COATED and FROSTED YUM. Powdery af and no staying power whatsoever. I think you’d have to use them wet if you wanted them to last more than a few hours.

ROW 2: Now this row I really liked. IRRESISTIBLE has the type of formula I’d associate with a pressed pigment. It reminds me of the DOC eyeshadows. It was still a little messy but performed way better than the first two glittery shades. Both of the mattes were nice too. Nice color pay off and smooth application. Like the mattes in the CHOCOLATE BAR PALETTE

ROW 3: meh. The 2 metallics apply nicely with your fingers or a flat eyeshadow brush but when I tried using a blending brush? Not good. The  pigmentation just wasn’t there. Eventually with many thin layers I was able to get a decent eye look but I don’t think you should have to work that hard to make high end shadows look good. And the matte black was okay. Nothing remarkable.

Both of these blushes are part of TF’S permanent line up. I don’t own any of their blushes individually so I can’t say whether these are the same. The formula is nice on both. The orangey one has some gold shimmer enough to be pretty but still wearable. The bright pink one has gold glitter that doesn’t stick to the skin. I just can’t get down with that barbie pink. That’s a personal preference and not a reflection of the formula. I’m sure it’s a lovely color that flatters many complexions but mine is not one of them. These blushes are very pigmented so proceed with caution. I don’t have the full sized version of the bronzer either. I’ve got it in a bunch of palettes tho. I love this bronzer. It’s matte and not too cool or warm. It’s very flattering on my NC35 skin tone but it’s not going to work for darker skin. The CHAMPAGNE TRUFFLE highlighter is one of the eyeshadows in the original CHOCOLATE BAR PALETTE. I briefly compared the ingredients and they looked nearly identical but they don’t feel the same to me. This one seems much harder to the point where it was difficult to get color pay off.

And the extras! I don’t care for SHADOW INSURANCE primer on its own. But I do like using it conjunction with a cream shadow/primer (ex shadow insurance first, topped with kvd high voltage or a paint pot). I love better than sex mascara but I can’t get down with colored mascara under any circumstances. I was alive in the 80’s. If you were too then you feel me. The glitter is their BLUE ANGEL glitter with a new name. It’s platinum with blue and gold reflects. And lastly I love the eyeliner. The felt tip applicator is fine and easy to work with. The real test will be how long it lasts. Sometimes I’ll get 2 months out of one and others they dry up in 2 weeks. 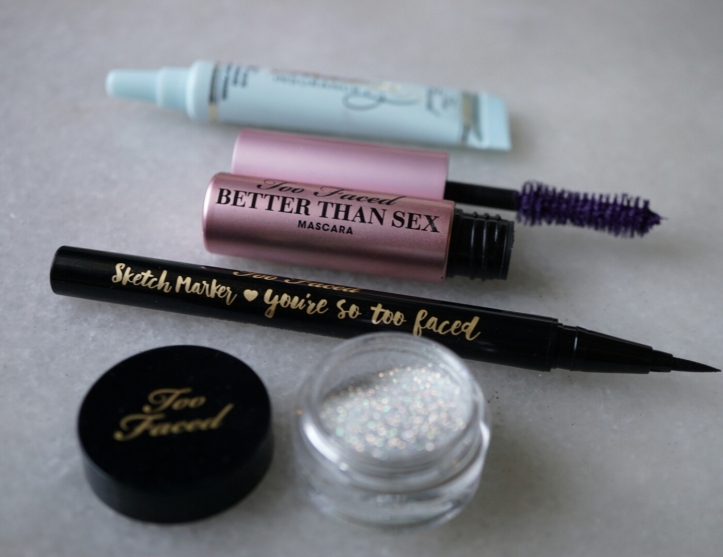 Even with as much as I love Nikkie and Too Faced, I can’t recommend this set. And I usually really like TF shadows. I briefly compared the ingredients in this palette to some of their others and didn’t see any obvious differences. Even the best brands have a misstep now and again and this was, for the most part, a miss for me. I liked the eyeliner very much and will repurchase and I might have to invest in some of their blushes but I found the set as a whole to be disappointing

Well excuse me while I am under the weather. THESE LAUNCHED! 10% off with code BEAUTYCULT
Round of applause to @deandranicoleee for capturing these swatches of the dark and deep dark spectrum of the new powders dropping TOMO!
Swatches of the new Super Shock Shadows (and repromoted )
Swatches! Yes I am posting them with names in the next post!
@acebeaute released not one but two new palettes! 10% off with affiliate code BEAUTYCULT
TODAY 1/4 10am PST / 1Pm EST @colourpopcosmetics: Lunar Year Collection! Celebrating the year of the Tiger 2022!